My crazy two weeks : Week One 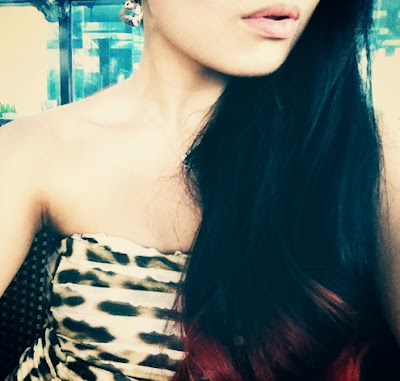 It's been the craziest two weeks ever.. and I loved it!
It all started on Thursday when I performed for the Hitachi eBworx Launch Luncheon at Hilton Hotel, KL Sentral.

Since it was a luncheon, I was there at the venue by 930 am for soundcheck and the works.
Feels a bit lulu to be all dressed up and full hair & makeup at such an ungodly hour. I admit, I was pretty sleepy and tired but meh, the vainpot in me was wide awake and enjoying the attention she got. 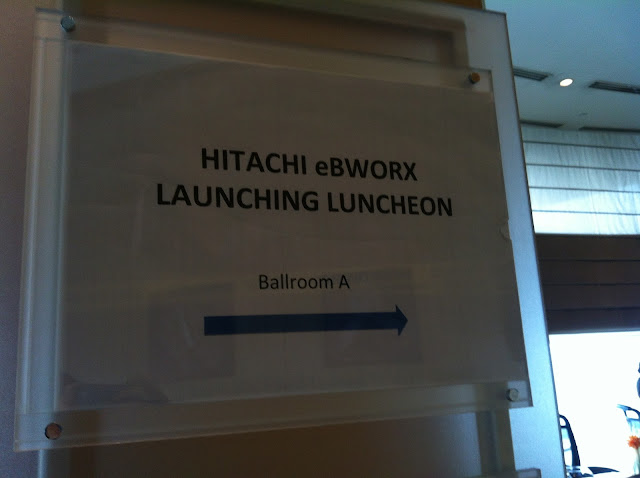 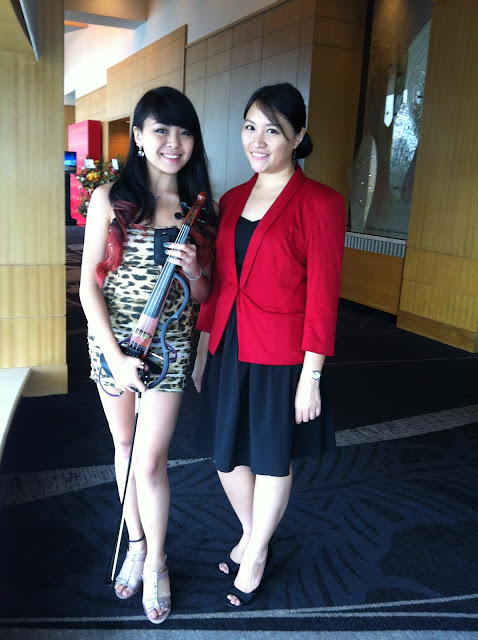 Me & my babe Choulyin. And she was in charge of me! Her company is behind the entire event and she got me to perform for the event! :) 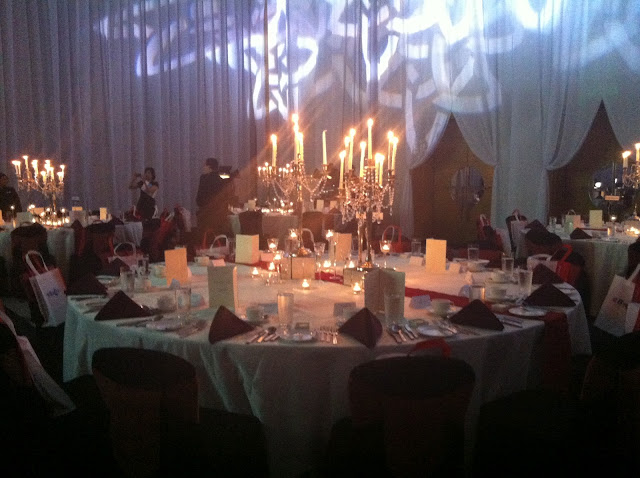 The venue of the luncheon was so grandly decorated. *jelly*
I love the centerpiece of the tables! It's somewhat simple, but leaves such an impact. Genius, indeed.
I'm glad the performance went quite well as I got to walk around while playing. The event was a success too.

DAY TWO :  Daniel and I had a salsa performance at Taylors Lakeside campus for the Expressions event. Charms was our personal coach, grilling our asses every night at the studio for practice until 1am from Monday right up till the day of performance itself!

Thinking it was just a performance, and not a competition like the Malaysian Latin Dance Championships, I thought it miiiiight be a lil less hectic.

Man I was wrong.
Sure, the practices are definitely more productive thanks to Charms but the stress level was still as high, if not, worse! Nonetheless, we managed to make it and put on an awesome performance. Daniel and I enjoyed the spotlight as we gave our best on the stage.

Daniel, myself, Kat and Ben! Kat and Ben put on an awesome performance as well, and Kat's costume was just stunning.

I decided to go black this time because I wanted another costume. So.. I DIY-ed this one again. It was so super rewarding seeing the shine of my pretty crystals on the dress especially when the lights hit. I got bought 1440 pieces of white crystals and stuck all of them, one by one on the costume! Yeah at one point, I had a headache.

My instagram of the finishing product the night before the performance. 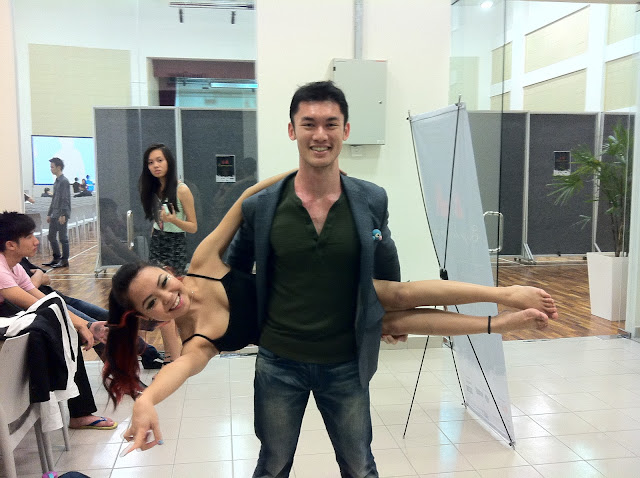 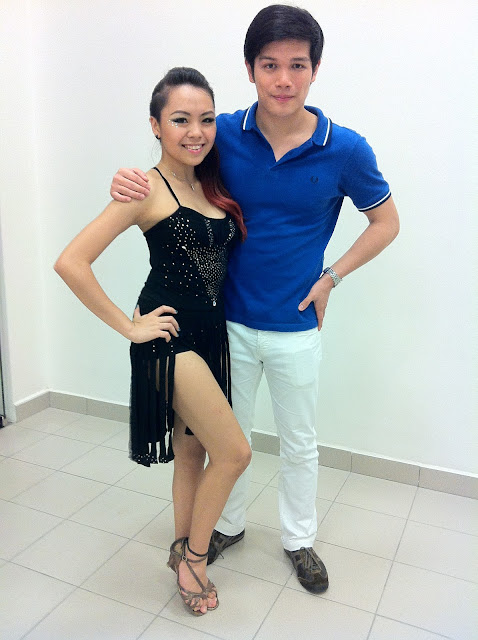 Shaun, one of my friends who came to show some love and support. :) 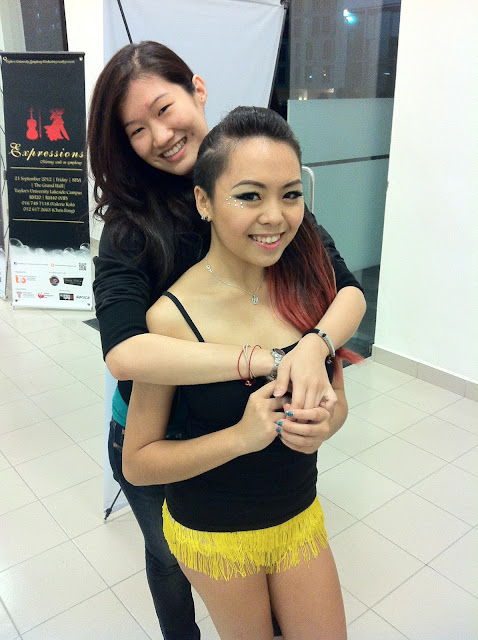 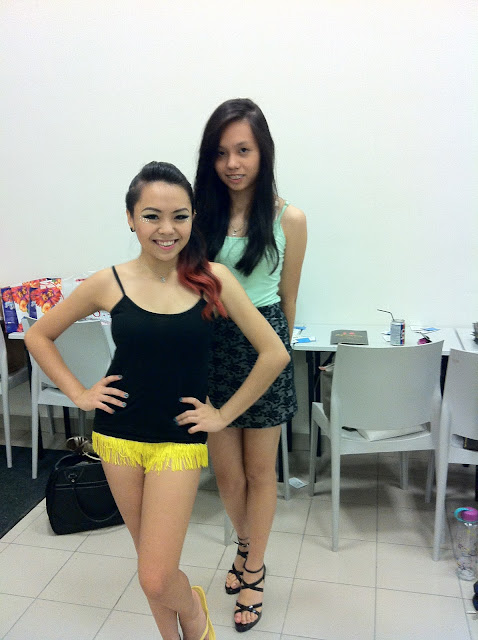 Kim, who wore heels and was towering over her older sis. -_-

Okay, next. Friday was the salsa performance night.
Saturday night was The Gig at Paradox Cafe, Bandar Utama!

Not a dancer that night but a violinist. Hehe.
Paradox Cafe was a little hard to find, I admit, but it's a cozy little place with quite good food.

Man of the hour, Darren Teh from An Honest Mistake

Alloysious the beatboxer and myself.

That night was pretty damn awesome. Not only did I make a new friend, I also got a new performance partner! The feeling is cannot be explained! We were introduced by my uncle, who is also a performer, after 30 mins of chatting, we started to try to jam together. We clicked so well, and before we knew it, we were impromptu-ing onstage after my set. Hip hop violin with the beatboxer. I definitely felt a rush of excitement! Plus.. we are working together at the moment for more performances to come. :)

There were a string of accoustic performances that night, including Juliets of Eden. Some of them were pretty good and I enjoyed the night making new friends. It was one of those laid-back nights with good music.. the only heart attack I had was having to go to Paradox Cafe after getting confused with the actual venue and leaving the GPS in my mom's car. Thank goodness Dustyhawk came to the rescue and took me there. Phew.

That makes one of the two crazy weeks I had. I even had a mini breakdown at the gym on Friday from all the pressure. But hey, I got out of it just fine. All I had to do was keep calm and look pretty, I guess...(vain,much?)