Another week has passed.

So, last week, I had received a call from a bride who last minutely wanted a violinist to play for her march-in for the wedding reception. And since it was last minute, she couldn't find anyone else who would do it. So, it's Super Ash to save the day!

*was so tempted to poke the cake*

I'm just kidding. I'm glad she called because I was just thinking of how I missed performing for weddings, since the last one, which was my cousin's.

This one was held at Duck King Tycoon, at Wisma Selangor Dredging, Kuala Lumpur. It was a Chinese wedding reception. They have requested me to play "Endless Love" as the march-in song. I thought it was a pretty good choice, also one of my parents' wedding songs. 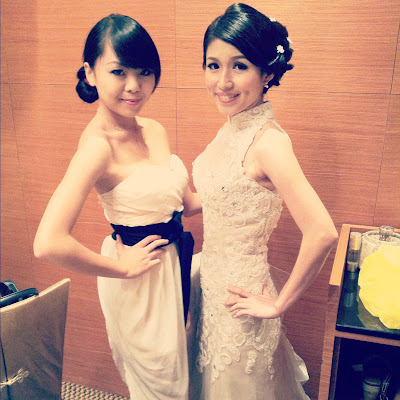 Here's the bride and myself! She was so gorgeous. Loved her gown! The thing I look forward to during weddings... bridal gowns. heh

There was no sound technician.
No one knew where to plug my electric violin in.
Tried every hole to jack it in but no sound.

I swear, it was 30 minutes before the whole thing was going to start and there was gonna be a no march-in with the violin. I didn't care. There WAS gonna be a show.

Finally, Dan managed to find the right place to jack in the violin to and there was SOUND. Was never so happy in my life. Amazing, he is.

You know, before every huge event or planned event, something goes wrong and then problem is solved and things go back exactly as planned? I thank God there was a happy ending to my situation.

Crisis averted.
Then everything else went smooth sailing. Even with no sound technician. ;)

I had used a wireless mic to play and walk at the same time. It was all good and the couple requested me to play another song after the first course.. and I played the same one I had played and arranged for my cousin's wedding.

I'm glad they liked it. And I had fun performing for them and the crowd was just lovely.
Congrats to the bride & groom!