Well, there's a new club in town.
Ladies and gentlemen, lemme present to you, Aquasonic!

This new club is located in Sunway Pyramid, Subang Jaya. It is at where the old Opera club used to be at, right in front of the Lion head main entrance.

So party people, time to rejoice!
Especially when you have 10,000 sq feet of party space. Aquasonic also shares the place with Celcom Blue Cube and Studio Lounge.

What's special about this club is that it is water-themed. Hence its name being Aquasonic. When you enter the club, it is as if you're inside a gigantic underwater aquarium, surrounded by blue hues everywhere.

The interior of the club is predominantly illuminated by aqua blue lights, with a make-shift LCD aquarium on the walls and wave lighting to amplify the feeling of being underwater even more.

I have this affinity to the water, this club definitely earned some brownie points in Ashley's books! Imagine partying underwater. That's the feeling you will experience when you party here at Aquasonic!

As I walked into the VIP area, the glowing blue water under my feet caught my eyes. Then, I realized that there was an enclosed mini pool beneath me! It felt as though I was walking on water.
Other than that, the VIP section is decorated with classy black leather seats and cushions, perfect for drinking sessions.

You definitely would not miss the brightly-lit bar which is directly facing the DJ deck at the back of the club, where drinks are served efficiently.
I definitely was not complaining when drinks were served as soon as the bloggers and I sat at our table. 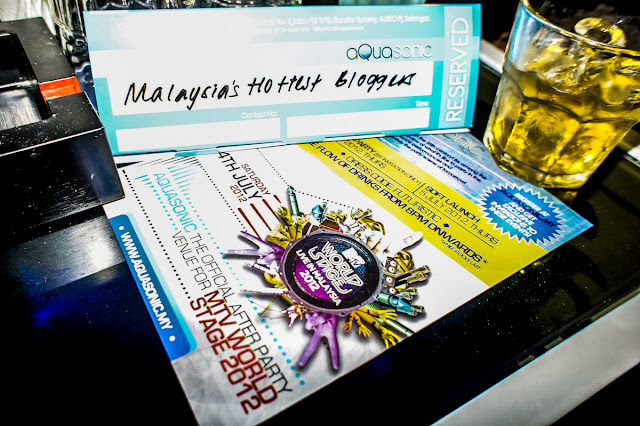 Our table, courtesy of Aquasonic. Also, this place was the official venue for MTV World Stage 2012's after party, which took place on the 14th of August 2012.

As we were there at the preview launch of the club, there was no doubt that the place was fully packed with party people who just want a taste of the underwater clubbing experience and of course, free flow of drinks. As they saying goes; "The more, the merrier", which definitely hyped up the place! 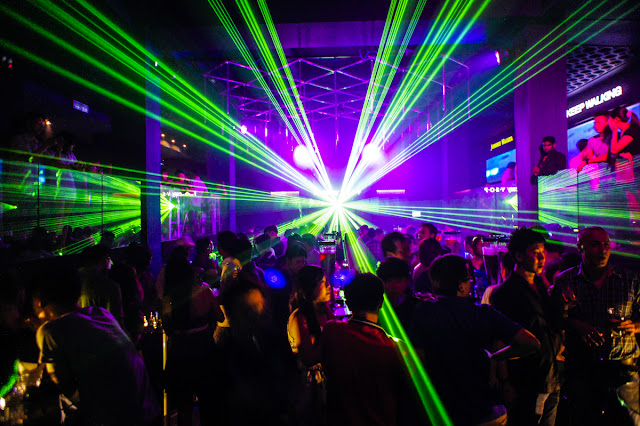 The party environment is not complete without cool 3D LED laser lights and music! It was one of the coolest lightings I've seen in the clubs, as it is not your usual spot lights. These light illuminate the area and you get glimpses of party-goers.. and probably, brief eye contact with a hot guy/girl, if you're lucky? Haha

The music played in the club was a mixture of dance, mainstream chart-toppers and hip hop. Music I'm able to dance to would definitely make my night an enjoyable one in the club!

Kate looking fierce in her biker jacket and leopard print skirt and Willie and her sexy stockings! 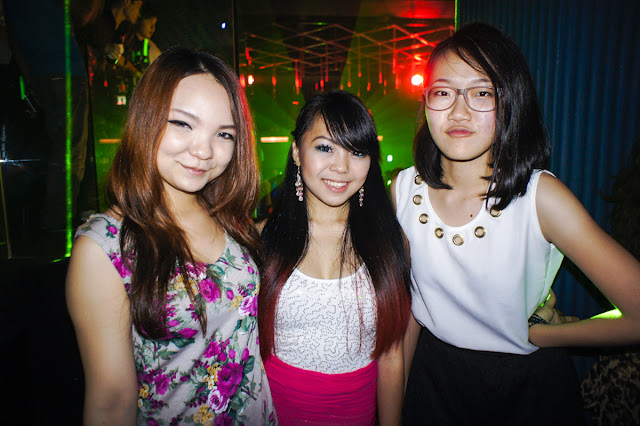 It was fun partying with Rachel and her friend Hueyyi.

MHB babes Kate, Casey, Chammaine, myself, Willie & Rachel dressed to the nines at the preview launch of Aquasonic. 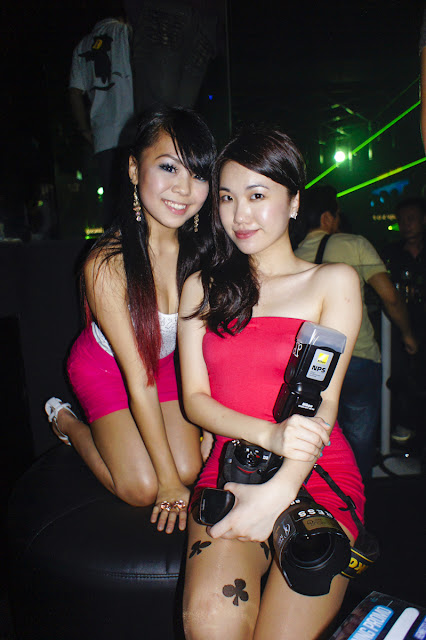 Willie and I were enjoying ourselves chatting and bobbing our heads to the music and also sliding around on the leather seats. Good thing they had ample seats in the club to fit so many people. The seat in the picture that we were both perched on showed how ample and big the leather seats were! This would be good for the ladies, especially those in their stilettos and need a breather from standing the whole time.

So, here's a place to check out tonight if you're stumped for ideas on places to go for a good night out. 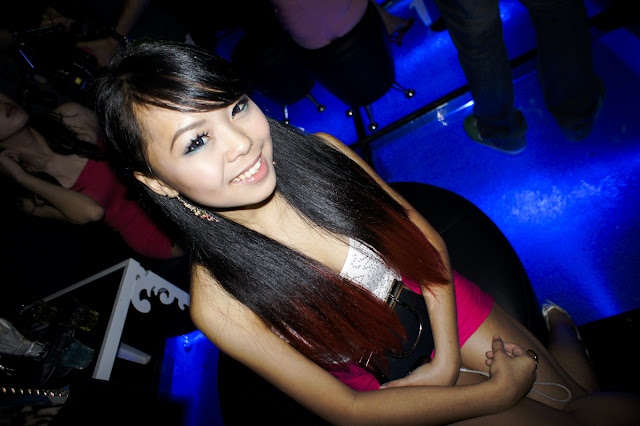 Ps. if you are more observant, you could actually see a sultry mermaid in this place!
I don't mean it metaphorically,as Aquasonic has its very own mermaid - this is a real life beauty swimming around in her own glass aquarium. So keep your eyes open, guys. ;)